I am not going to sit here and pretend to know about Tibetan and Indian Hakka cuisine, but being a lover of food in general, I was game to try Norling when a friend suggested it on Halloween night 2015. Specifically, Norling is a small restaurant located in Parkdale, and their menu consists of Tibetan and Indian Hakka cuisine. Most dishes are under $10 (items with seafood cost around $13), and the menu is pretty broad and split into the following sections:

There were several dishes on the menu that I knew about absolutely nothing about, so let me tell you a bit about them (according to my trusted friend Wiki).

Momo – is a type of dumpling native to Tibet, traditionally filled with yak meat (long-haired animal found in the Himalaya region of southern Central Asia, the Tibetan Plateau and as far north as Mongolia and Russia) and eaten with a variety of sauces. It is similar to Chinese bao and jiaozi (dumpling), Mongolian buuz, Japanese gyoza, Turkic mantu and Korean mandu. In Nepal and bordering regions of India, momos are typically filled with ground and seasoned water buffalo meat. Momos are served hot with tomato and sesame sauce usually seasoned with ground peanut, Sichuan pepper (timur), and cilantro.

Thukpa –  is a Tibetan noodle soup. It originated in the eastern part of Tibet.

Gyuma – is a blood sausage made with yak or sheep’s blood in Tibetan cuisine. Rice or roasted barley flour can be added as a filler. The sausage uses natural yak or sheep casing (intestine).

Okay, so now that we have that out of the way, let me tell you about my experience…

My friends and I arrived at around 6PM and there were several tables available. We sat down and were given menus. We browsed the menu and had questions about several items, but staff seemed too busy to come by and check-in with us. The restaurant was not full so we did not understand why we had to wait so long. Once someone finally came over to take our orders (my friend had to waive down a waitress), I found it difficult to get answers to our questions. So I played it safe and ordered the chili chicken without the sauce (as you know, I hate onions and the sauce was inundated with them). The other items that we ordered were:

I was not impressed.

Chili Chicken – My dish came with rice – period. I did like the spice on the chicken, but other than that, there was nothing special about it. I tried a piece of chicken with the sauce, and it did not help the dish to me – I preferred it dry because this way the spices were not hidden or overshadowed by the sauce. I really wanted to try the tingmo (steamed bread) but after trying to get our waitress’ attention for 10 minutes, I scrapped that plan.

Momo – one friend used to eat momos in India on a regular basis and was excited to try the momos here, and was sadly disappointed. After receiving the momos she was patiently waiting for them to bring out the sauce that one is generally supposed to have with momos, and after 10 minutes of radio silence, she called our waitress and she admitted to having forgotten the sauce. Once she brought out the sauce my friend told me not to even bother trying it since it was all wrong. I was not planning on trying a momo anyway because as everyone points out, I am the only person they know that hates onions with a passion – and the stuffing in momos has onions. The friend that was trying momos for the first time enjoyed them – but he had no terms of reference to use for comparison.

Langsha Shamo – We all tried the langsha shamo, and again, nothing special. I only had a couple of bites and found it bland, chewy, and boring.

Gyuma – the blood sausage was a hit among my friends. Who knew?! They found it to be full of flavor and not dry as it looked.

Hot & Sour Soup – just confirmed with my friend and he described it as, “quite flavorful.”

To be perfectly honest, writing this review was difficult for me because I had a hard time remembering the meal. All that kept crossing my mind as I thought back to that evening were the words “boring” and “average.” And that is an unusual feeling for a cuisine I have never tried before. Generally with cuisine that I don’t indulge in often, I either love it or hate it. Almost never falls in the middle. Sad to say that I have no plans on ever going back to Norling. Though this experience was not ideal, I do plan to give Tibetan and Indian Hakka cuisine another shot sometime soon. 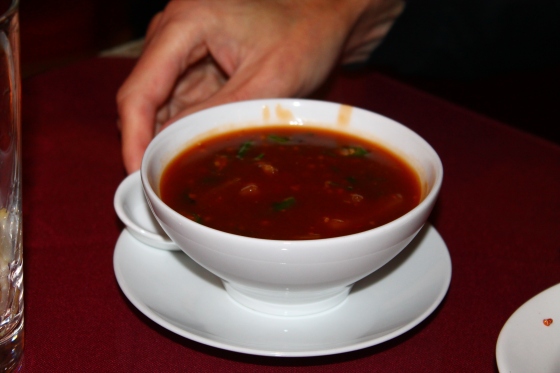 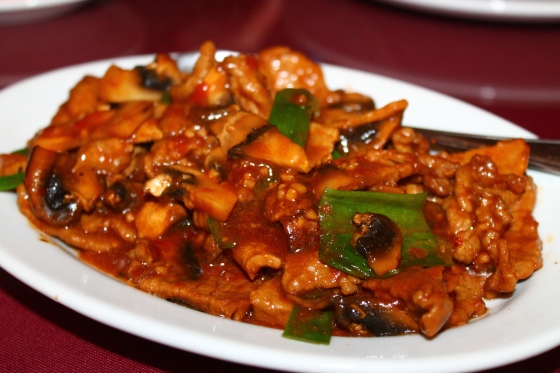 Sauces for the momos