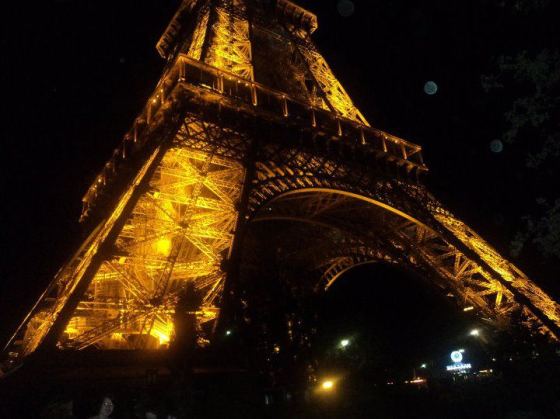 From our London hotel we were picked-up by a Contiki tour bus and driven to the ferry that was to take us over to France. On the bus I got the opportunity to meet many of the people who would become great friends in the days and weeks to come. To the dismay of many of the ladies we learned that there were only 8 males and 30 females on our tour. Of the 8 males (give or take 1…a little blurry on the number…I am on vacation remember!), 2 came with their significant other. Yes, I am sure that tears were shed. Tantrums with fist pounding and yelling to the Gods for such a tragedy must have overcome many of us girls, though such display of emotions were conducted in private I am sure (not me though, I did not express any such emotion since I am simply too mature for such behavior). Anyway, this tour was planned for the purpose of exploring Europe, and not for attracting the attention of the opposite sex. Let’s get our priorities straight people!

So, my roomy and I found seats on the bus and began to judge people. I mean, we began to people watch. This was the beginning of a 21 day tour and we were going to be spending a lot of time with this crowd. Can we survive it? Already there were people hungover at the back of the bus, and gossip was already spreading. Oh, I felt nostalgic. It was like being back in high school. Good thing I liked high school.

I spent most of my time on the bus looking out the window. Being a tourist it only made sense to take a picture of every mountain and body of water. Sure, some were ponds and really not great to look at, but only through experience and practice was I able to learn the difference between taking pictures of relevant material and crap. But I was a newbie, so here I was clicking away, “oh, look at that tree, it has leafs! And the pond with the beer cans floating on it! Cool!”

It was only when we reached our ferry that took us from London to France that I realized that I was in Europe. I figured this out when I was being asked to remove my belongings and put them in the conveyor belt in French. I heard this “blah blah blah oui….blah blah…mercy.” I have arrived! They are speaking to me in FRENCH! Whoohoo! Then I promptly turned to my Contiki mate and asked for a translation. She pointed to what all the other people were doing (i.e., putting their belongings on the conveyor belt) and she looked at me with such pity that really I am sure that what she really wanted to say was “look dumbass, just put your crap on the conveyor belt like everyone else and stop holding up the line! Great, I am going to be stuck with this girl for 21 days. Argghh!”

But no one was going to take my excitement away. I promptly threw my things in the bin they provided me with and spoke to the guards using all the French to my disposal “mercy, mercy. Oui, I am (how do you say this in French?) Canadian. Adios!” So I threw in a bit of Spanish in there, sue me! After this interaction it became clear to me that I had to get my hands on an English-French dictionary ASAP! After having our things checked for whatever it is they look for, we all went to the main sitting area.  5 minutes into the 1.5 hour ferry ride I realized that I was going to die from nausea.  I sat on a leather couch with rips on it and I thought, “this is it. I am going to die right here on a shitty couch while the room spins around me. Just great!” So I crawled into a ball and closed my eyes and prayed for us to reach the shore. Like, NOW! I am certain that they lied to us. 1.5 hour ferry ride to France my butt! It felt like 10 hours! But, it was all worth it. I reached France in one piece. I green looking piece most likely, but in one piece nonetheless. We all hoped back on the Contiki tour bus and began our trek to Paris.

I would like to say that I had a great view of Paris from our tour bus, but Contiki seems to love accommodations that are far away from civilization (can you say cheap anyone?). So, as we drove through the sketchy parts of Paris, I really began to question what it was that people loved about Paris. I mean, my brother drives me crazy with his dream about moving to Paris. What is it that people saw about Paris that was so great? We finally arrived to our destination and prior to disembarking our tour manager gave us some words of advice. With Contiki we all soon became familiar with the standard speech:

“So guys, we will be arriving at our hostel in a few minutes. I am providing you with a map of Paris and the main sites that you should explore while in Paris. The hostel is not on the map however and if you wish to travel from Paris to the hostel you can take a cab for €22 or take the Metro from the city and a map of the Metro is attached. This area should not be traveled alone.  When possible travel in a group…..”

As the tour manager relayed this information I looked out my window and noticed the homeless people on the sidewalk and the tents that had been built as makeshift homes on the side of the streets. Yes, this area did look quite sketchy, but at the same time it made it appear more realistic. No city is perfect. Yet, I really did wonder how much better the “Paris” everyone talks about would be. I continued to wonder about this as we disembarked the bus and grabbed our luggage. When I spotted the Beast I dragged him to the corner and waited for our rooms to be assigned. We were pretty lucky that in Paris we got rooms that we only had to share with one person and had an ensuite bathroom. Having a bathroom in our rooms overtime became a rarity and one that we dreamt about fondly. But in this instance my roomie and I took advantage of our good fortune and took 20 minute showers each. When arriving later in the afternoon or evening at a location usually meant that we would be spending the night in, but the fact that Paris was accessible by Taxi allowed us to get a group together and cab it to the city for an evening of exploring. I was excited to leave the confines of our hostel and see firsthand what the city of Paris was really like. So 8 of us ate dinner quickly and arranged to find a cab to take us to Champs-Élysées.