I usually like to have brunch at establishments that offer an array of egg-inspired menu options that include some type of meat, such as pork or beef. However, Regina and I wanted to be adventurous, and considering that we both enjoy pastries, we decided to have a Parisian-inspired brunch. After some back and forth, we decided to try Bonjour Brioche on Queen East.

Clearly Bonjour Brioche has done well over the years. They had an entire wall filled with awards and even a signed picture of Bill Cosby.

I arrived at the restaurant about 10 minutes before Regina, so I took the opportunity to take some pictures of the exterior of the restaurant. When satisfied with my exterior shots, I proceeded to go inside. When I walked in I was holding my camera, and I got this distinct feeling from the staff that they did not appreciate me taking pictures. Are you for real? The unpleasant looks I received set the tone for the meal we were about to have.

Pretty short menu. Just the one side. But it covers pretty much everything you would want; dessert, drinks including cocktails, soups, sandwiches, salads and an array of sweet and savory tarts. 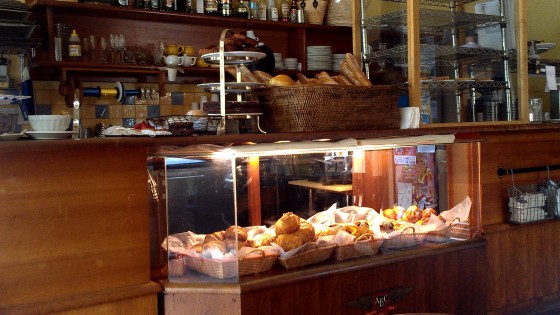 They had an array of breads and pastries. During our visit people kept walking in to purchase bread.

There are several flavors available, but I chose the Blueberry Custard because I love blueberries and custard. They were $1.85 each. My first impression of the brioche was that it would be dry and cold. But I was pleasantly surprised. It was in fact soft on the inside, with a flaky crust and a creamy filling. I was very pleased.

Regina ordered a plain croissant for $1.70. She found it soft in the inside, with a “crumbly” crust. She did want to note that it was a bit “too” buttery. I am not sure how many of us would find an issue with that though.

For my main I wanted a dish that included eggs, so I ordered the smoked salmon & scrambled eggs with chives, rosti potato, creamed horse radish and caviar for $11.50.  I had originally asked our server if it was possible to get the eggs poached. He said no because they did not have any water boiling. Ok. After all, it is quite challenging to boil water (sarcasm here). So I asked if sunny side up would be too much trouble? Ok, so maybe I was starting to get annoyed. But he said that they could do that. Regina and I were still deciding, so when we finally knew what we wanted, a different server came to take our order, and she said that no, I could not get them sunny side up. (*Sigh, this is getting ridiculous!) So I told her that her colleague said it would be okay. She gave me a look of annoyance and went to check with the chef. “Fine”, she said when she returned, he will do it because the other server already told you we would. Wow, I did not ask you to perform surgery! Then to really piss them off, and certainly not intentionally because I do not eat onions or their family members, I asked for no chives in my meal.  She seemed to be writing our order and all the details on her pad. Now, below is what I received. Can you spot the chives?

Overall, it tasted okay. I got sliver of smoked salmon, bread that was a bit too tough for my liking (so much so that I feared cracking a tooth), an overcooked potato rosti that was devoid of basic spices such as salt, and chives that I had asked to be omitted. Because I like simple food, I finished it, but only after adding salt to the eggs and potatoes.

Omelet special for $10.50 with a mixed green salad.

Regina got the omelet special with roasted peppers, onion, spinach and cheese for $10.50 with a mixed green salad. Overall Regina was happy with her meal. The onions were caramelized, the eggs still a little runny (we like this), and the salad had a nice vinegar and rosemary dressing. 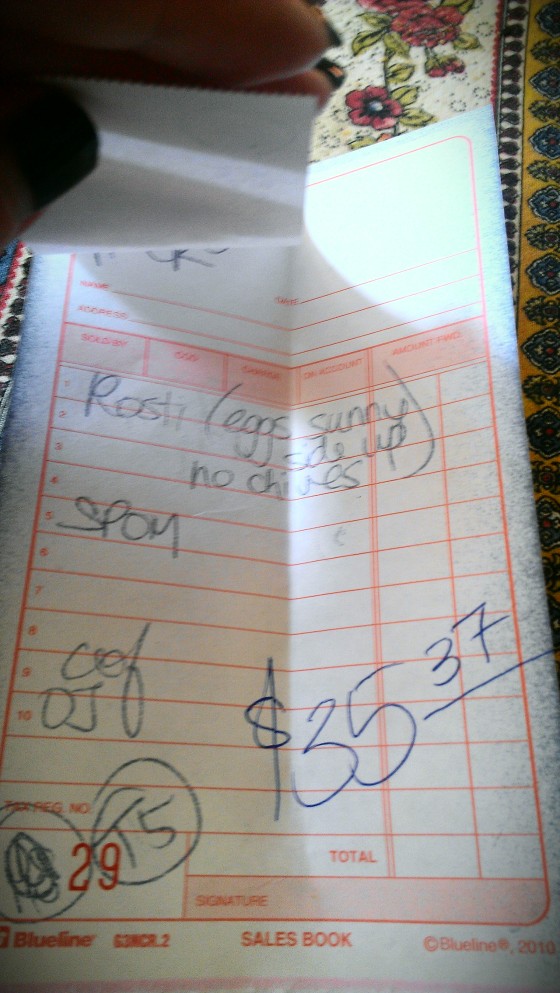 Note the “no chives.” Also, we paid $40 and never got any change. Regina paid, so she was okay with this because she is very polite. I would not have been so kind. I believe in tipping appropriately, but the tip should ultimately be left up to the customer. Talk about an appropriate ending to such a mediocre experience.

So, would I return? I would certainly be willing to pick-up a blueberry and custard brioche to go, but I would definitely never dine in again. Such terrible service, even if accompanied by amazing food would not be enough to entice me into a second visit.

2 thoughts on “Bonjour Brioche! Why the attitude?”