I was in Chicago in early July 2012 and during my visit I had a list of restaurants that I wanted to visit. I became a huge fan of Rick Bayless after seeing him compete on Top Chef Masters and I knew that he had several restaurants in Chicago.  Rick Bayless is known in the culinary world as an expert of Mexican cuisine and having lived in Mexico city for some time and being a lover of Mexican food, I decided to visit one of his restaurants in Chicago. After reviewing his restaurants, I selected XOCO mainly because of the great reviews it has received, and also because it is one of his most budget friendly restaurants. Remember that I did say that I had made a “list” of restaurants that I wanted to visit.

When I walked in to the restaurant there was a hostess that gave me a number. I did not know what the number was for, but she told me to give it to the person at the cash register.  After I paid for my meal and walked over to sit down, another staff member asked me for the number I was given and showed me to my seat. Ahhh so the number was the number of my seat. It was 9am after all and my brain had yet to cease sleeping.

I started off by ordering “The Authentic” which was an authentic Mexican hot chocolate.  It tasted a little bitter and it was very thick. It almost had a bit of an oily texture to it. I certainly think it is an acquired taste. After a couple of sips I got used to it. Though I probably would not order it again.

The water they offered was not flat, which was a disappointment to me because I do not like fizzy water. When I get a bad stomach ache I take Alka-Seltzer and this is what the water reminded me of.  I am sure I could have asked for a flat water, but I took what was being offered because I wanted the “full experience.”

Churro and a chocolate dipping sauce for $1.60. Sauce extra.

I love churros, so I knew that I had to get a churro at XOCO. I had high hopes that I would receive a hot churro because to me there is nothing worse than a cold pastry. When it was brought to my seat I received it nice and hot and straight out of the frier. The chocolate sauce felt redundant after the hot chocolate, though this sauce did taste like dark chocolate without the oily-like texture. 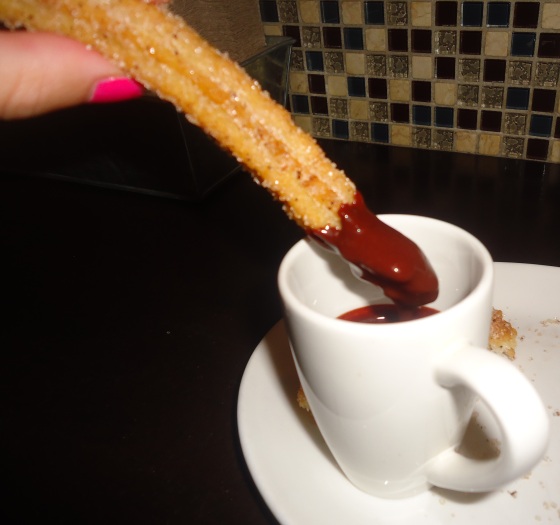 So, I am not a fan of onions and I understood that ordering at XOCO would be challenging because the majority of Mexican dishes use onions. So after reviewing the menu I asked if I could have the Huevos Rancheros with the sauce on the side. They said that this would be possible, but that there was no point since the dish would not taste good without the sauce. Huh? Are you kidding with me? How can it not taste good without the sauce? I am Hispanic and I have been eating tortillas with eggs, beans and cheese most of my life WITHOUT a sauce! So they suggested the French Toast instead. NO! I said. I know what I want and put the sauce on the side. With a sigh they put in the order. So this is what I received. It looks damn delicious to me!

Here is the roasted tomato-serrano sauce on the side. I took a moment to taste the sauce and the onions were chopped quite finely that I could not even taste them. Perfect!

So I proceeded to pour the sauce over the tortillas, cheese, eggs and beans.

Breaking the egg is always exciting for me. It is so disappointing when you go to break an egg expecting it to ooze out,  and then nothing comes out.

I did enjoy my time at XOCO and found the food to be quite tasty. But for some reason I remember feeling a little disappointed when I finished my meal. I am not sure if it was the small portion (I like a big breakfast), or having to negotiate how I wanted my meal. Whatever it was, I am not sure I will return for their breakfast the next time I visit Chicago, but I would return to check out their lunch menu.