Lately my spare time has been consumed by food. I have been eating it, cooking it, taking pictures of it, watching it (I am obsessed with Masterchef everything), and recently I have started taking cooking classes. The first item on my list that I wanted to learn how to make was sushi. I eat it often enough, why not make it for myself? But come on! Let’s be realistic here. Sure, there are many things that I like to eat, many of which I could probably make myself, but actually go through all the trouble? Not likely. But I was hoping it would be different with sushi. Plus, I was looking to impress friends at my next gathering by showing them my sushi creations. “Oh yeah! I made that. FROM SCRATCH!”

But here arose the dilemma. Where could I take an affordable, yet fun sushi class in Toronto? My logic is, if I want to take a cooking class, it has to meet a specific budget. Generally people think that taking a cooking class is too much of an expense. The way I break it down to myself to allow myself this experience is to think about how much a dinner out on a Friday night would cost me. On an average Friday night for me, it would likely be about $30. So with a cooking class I get to not only eat the food, but learn how to make it as well. Sounds like a deal to me! But where can I get ALL this in Toronto?

So off to Google I went and searched “sushi class Toronto affordable.” Some things that came up were certainly not “affordable”, but I did stumble upon a blog where the blogger described several cooking classes in Toronto, including “Sushi Making for The Soul” (http://sushimakingforthesoul.com/classes/). It sounded exactly like the class I had in mind and lo and behold, it was $30! I was so excited by my finding, that I contacted a friend and asked him to sign up with me.

In my eagerness to start the class, I was the first person to arrive at Aphrodite Cooks were the class is held (45 minutes early!). Although I was early, Sang Kim, the instructor, was incredibly welcoming and even cut his break short to attend to me. How amazing! I mentioned in passing as he showed me around the room that I had not had dinner yet, so he went ahead and prepared me a plate of food. How cool is that?!

Being the first person to arrive I had a chance to have a little chat with Sang. Sang shared a brief history of his past and his love for food with me, and it was hard not to be impressed by his intelligence and wisdom.  After speaking with Sang, I thought of how interesting it is that passion, curiosity and determination can shape your life and take you on a journey you would never have imagined. How often do we have a plan or an idea of where we expect to be in 5, 10, 15 years, only to find ourselves in a place we never would have pictured ourselves in? Well, I did know that I was glad to be here and excited to learn something new this evening. 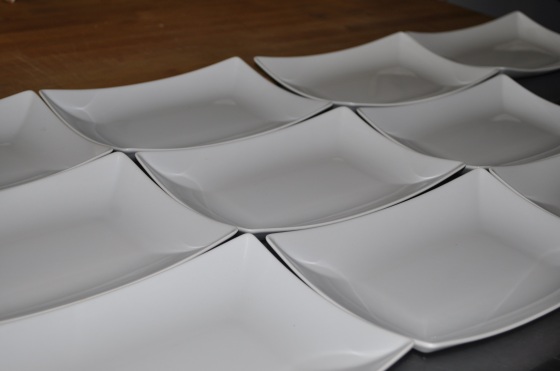 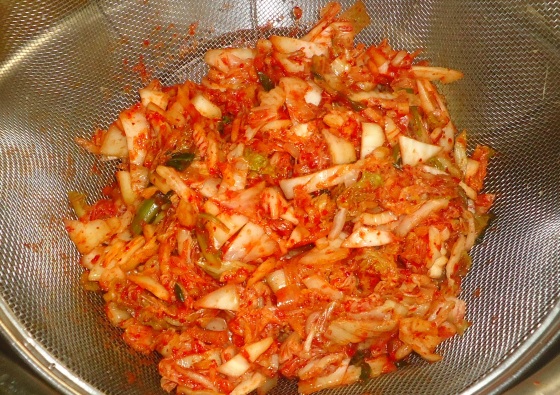 People began to trickle in and by 7:30pm we had a full house. There were approximately 40 people in attendance. They even had a table in the back saved for a bachelorette party. Every table had wine being passed around and a lot of chatter happening. It really felt like a social event, rather than a class. I was glad I had asked a friend to come with me because I am not sure how I would have felt attending alone. It seemed like everyone had brought a friend, or came with a group. 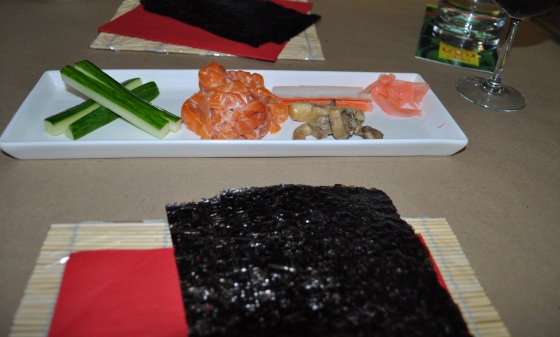 My station. You shared the ingredients with the person in front of you.

I was eager to get started on the “learning” part of the night. Sang commenced the class with a history of sushi. Unfortunately he was unable to find the lights so the images on the projector were not clear, but he was very engaging and moved around the room as he shared with us his knowledge of sushi. For this class we learned that we were going to be making 4 types of rolls: Futomaki, Hosomaki, Temaki and Uramaki. 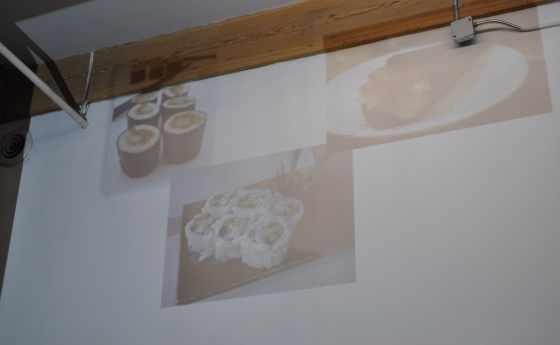 Also known as the “thin rolls”, these rolls have nori (seaweed) on the outside. These rolls generally contain only one filling; in this case we used cucumber. 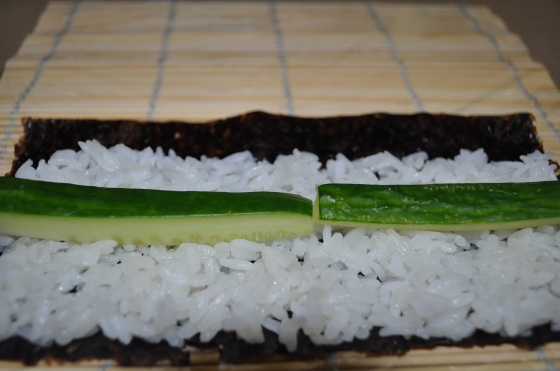 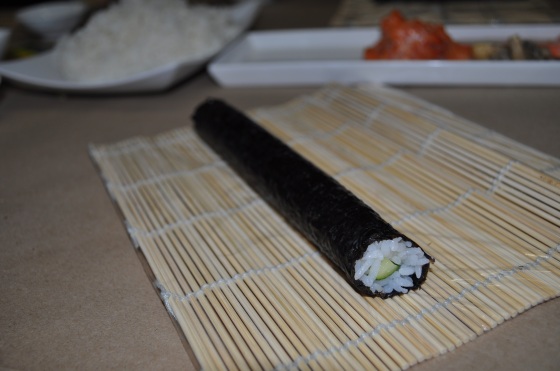 Also known as the “inside-out roll”, it generally has two or more fillings. Uramaki differs from other rolls because the rice is on the outside and the nori inside. The filling is in the center surrounded by nori, then a layer of rice, and an outer coating of some other ingredients such as roe or toasted sesame seeds. It can be made with different fillings, and in this case I used salmon.

The “hand roll” is a large cone-shaped piece of nori on the outside and the ingredients spilling out the wide end. I made a simple one here with a crab stick.

Is a “large, fat roll” with nori on the outside (similar to the hosomaki but with more filling). This was the last roll we made and we received the addition of a stir fry that consisted of ground beef and kimchi which was a recipe passed down to Sang. It was delicious. Sang also offered the class more of the other ingredients that we had used for the other rolls, such as salmon, cucumber and mushrooms.

My friend and I had a great time in this class. I particularly enjoyed hearing about the history of sushi and like a big kid I got a kick of getting my hands dirty while I attempted to make the different types of rolls. I do suggest however that you invite friends/family to take this class with you. In this class you are bound to have a great time and learn a great deal because everyone was so friendly and Sang is very sociable, yet I feel that it will be a better experience for you if you partake on this sushi-making adventure with people you can be silly with. As my friend pointed out to me during the class as I pushed myself to make the ‘best roll’ in the class….“Itanni relax. Just have fun!” And I did have fun.

Sushi Making for The Soul

….Next cooking class adventure, “A Taste of the Mediterranean.”

2 thoughts on “Sushi Making. Wanna come to the party?”