On several occasions I have purchased online food coupon/deals from sites such as Groupon and TeamBuy. However, I had been very disappointed with the restaurants that I purchased a coupon for. I started to believe that the reason restaurants participated in these online coupon deals is because they were desperate for business since their food was subpar. Over the summer a friend e-mailed me information about a coupon available through TeamBuy for a restaurant called Bodega. It was because I love brunch that my friend e-mailed me information about this coupon. Specifically, the coupon was $32 for a $64 Weekend Brunch Credit at Bodega Restaurant in Baldwin Village. I went online and read the reviews for Bodega, and found limited information on their brunch. I was torn. I was apprehensive because my past experiences of the food I ate at these participating restaurants had been terrible. But then again, the menu looked good, the prices were reasonable, and the fact that there was next to no information online about their brunch enticed me. This restaurant needed someone to blog about their brunch! “Done, I will take a chance on you Bodega”, I thought.

Fast forward several months later when it hit me, “crap, I have not used the Bodega coupon.” I had a terrible feeling as I logged into my TeamBuy account. I skimmed the coupon and read that it had just expired. Arghh!! What to do? First thing I did was e-mail TeamBuy to ask them if they could still honour the coupon. I received a response from them the next day that said that I can use the value of the coupon at the restaurant. Hence, the deal itself had expired, so I now had a $32 gift certificate for Bodega. I am stubborn, so instead of leaving things there, I e-mailed the restaurant directly to let them know my predicament. The same day Mr. Mauricio Pozos from Bodega e-mailed back and in a very kind e-mail he stated that they would honour the deal, and then asked me when I would like to visit them for brunch so that he could make certain that the deal was honoured. Wow! Now that is service. One point for Bodega! More than ever I wanted my hypotheses that “only” restaurants with mediocre food participate in these online deals.

I invited my friend Angela to join me for brunch (I did not buy her a birthday present so this was my way of apologizing for my oversight. Ick! Bad Itanni!). 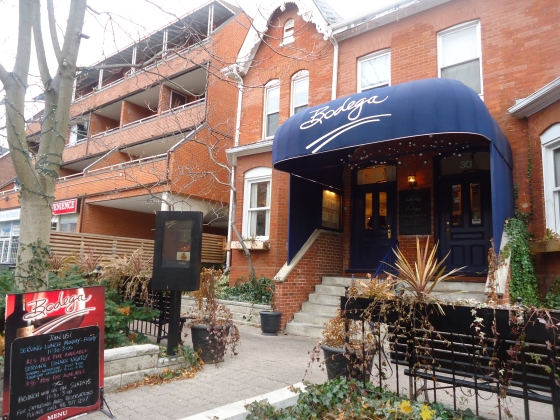 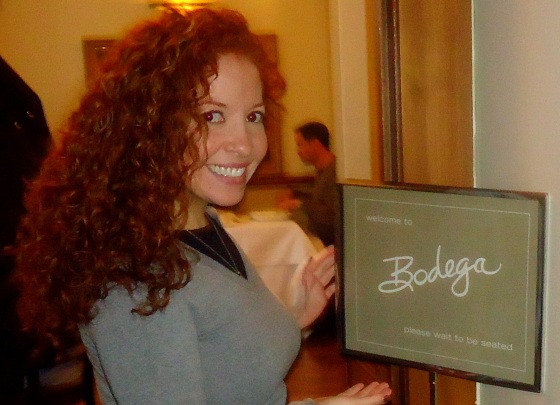 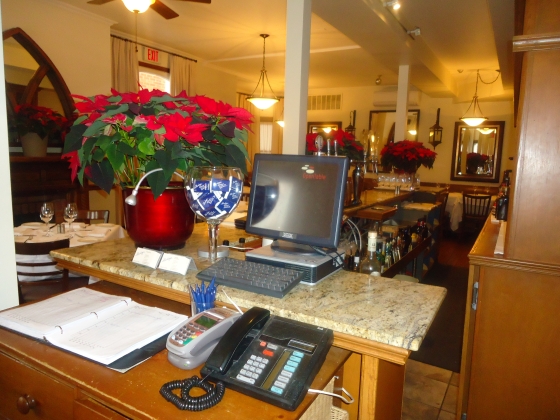 The minute we walked into the restaurant we felt warm and comfortable. Well, they do have a fireplace and it was freezing outside. We were greeted at the door and we were given the choice of where to sit. We immediately gravitated towards the fireplace. 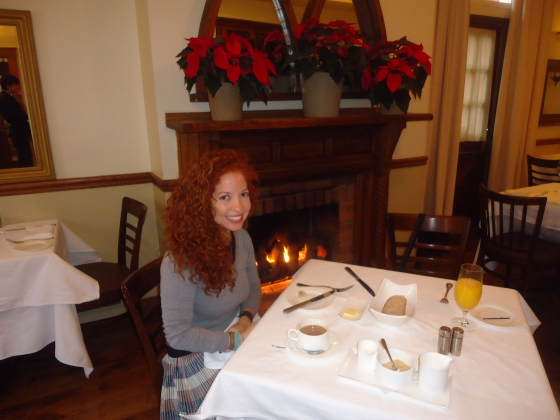 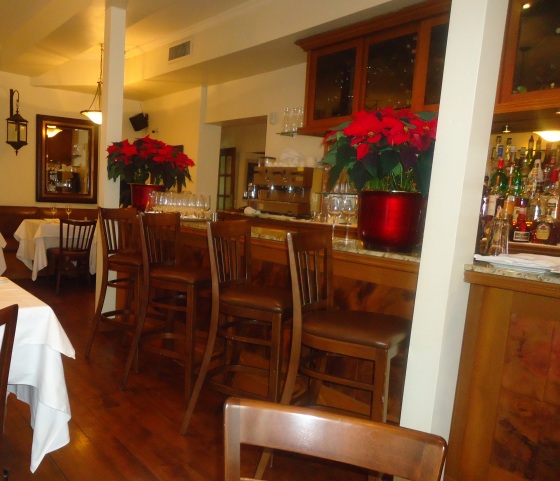 Shortly after seating down our waitress came over and confirmed that we were the party using the TeamBuy voucher.  I usually feel embarrassed when admitting that I am using a coupon/voucher, but in this case it was done so casually, that I did not feel embarrassed at all. 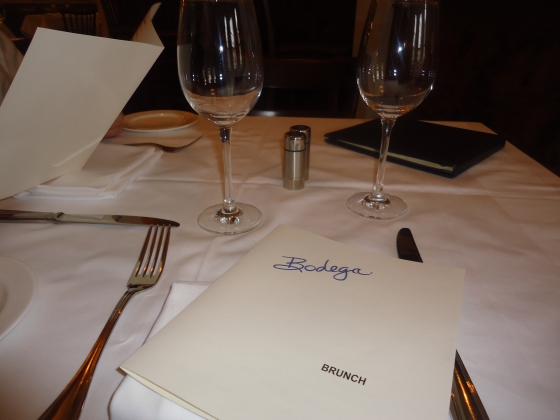 After reviewing the menu we decided to start with appetizers. This was exciting because I rarely try appetizers at restaurants. I always go straight to the main. But this is where Angela and I had to compromise. I had my eyes on the Warm Goat’s Cheese Crostini with Frisée, Bacon, And a Raspberry Vinaigrette for $10. I love goat cheese, so naturally I wanted to try this. My second choice was the Vine Ripe Tomato Salad with Buffalo Mozzarella, Black Olives, Basil, And Balsamic Vinaigrette.  Angela does not like olives, so I ordered this one for me and Angela ordered the other salad. No biggie, my friends and I have a communal approach to how we eat our food; we share everything. 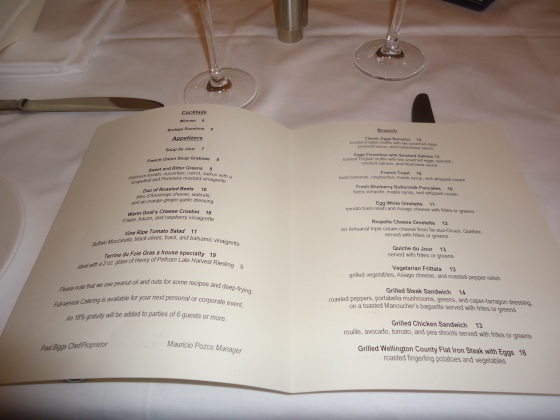 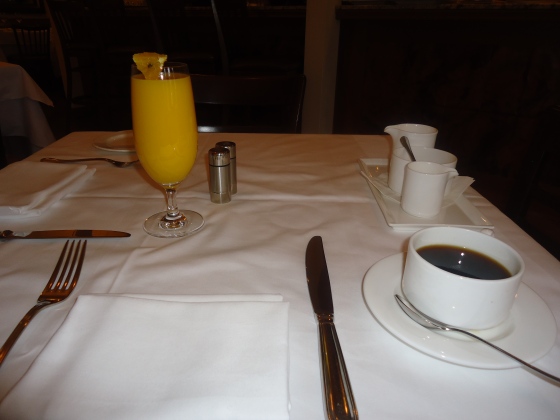 We started with coffee and orange juice. Coffee was refilled every time I was close to finishing a cup. Big plus. 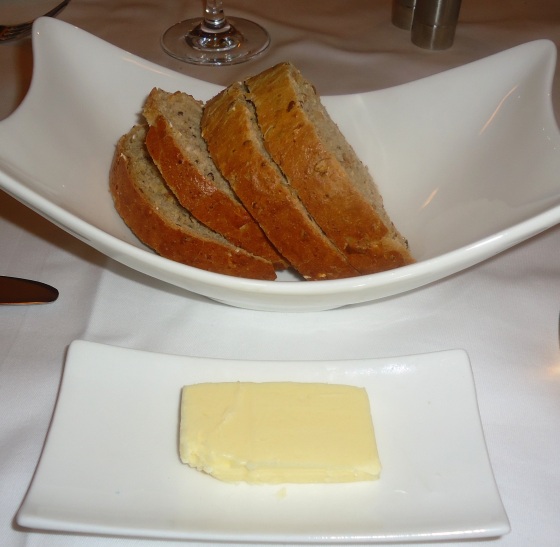 Hot bread with butter. Did I ever tell you that I LOVE fresh hot bread? Yep, it was nice and warm. Yum! 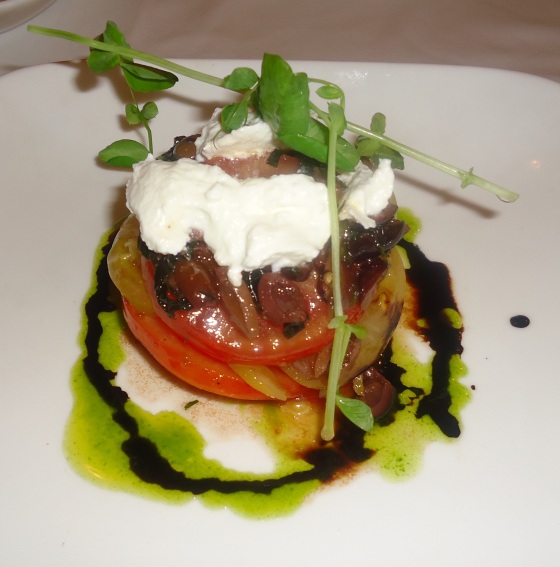 Appetizer 1: Vine Ripe Tomato Salad with Buffalo Mozzarella, Black Olives, Basil, And Balsamic Vinaigrette for $11. I really enjoyed the presentation. So pretty. Overall I found this salad to be quite delicious. I did find the tomatoes to be a tad too ripe, but that is me nitpicking. 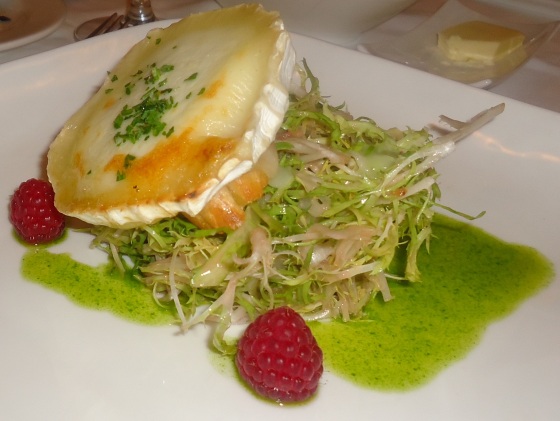 Appetizer 2: Warm Goat’s Cheese Crostini with Frisée, Bacon, And Raspberry Vinaigrette for $10. I really liked this salad, in particular the goat cheese and crostini. The crostini was toasted to a golden brown and stayed crispy even after all the components of the salad were added. Who likes soggy bread? Not me. But I gotta admit, I would have been quite satisfied with just the fried goat cheese. Ohh cheese, how I love you. 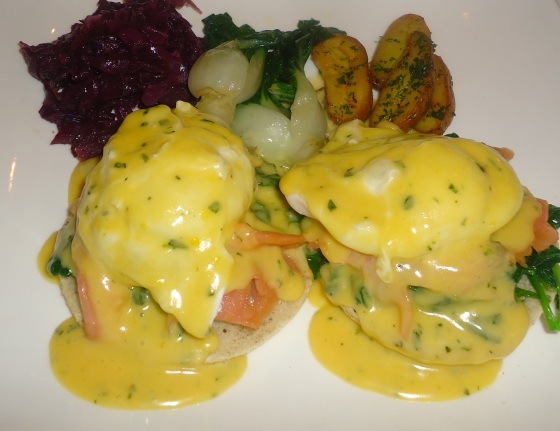 Main 1:  I ordered the Eggs Florentine With Smoked Salmon on Toasted English Muffin With Two Poached Eggs, Spinach, Smoked Salmon, And Béarnaise Sauce for $13. I know, you are shocked with what I ordered. Yes, that was sarcasm. I tend to always order the same thing for brunch. I was a bit confused when this dish was placed in front of me. Never have I had this combination of sides for brunch. Side of fingerling potatoes, pickled cabbage and baby bok choy. Individually I like these sides, but together, specially with a creamy main, it just did not work. I did not have any inkling that I would be receiving these sides with my main. If I did, I definitely would have gone with fries. I was surprised that I did not like the fingerling potatoes. They just did not taste right. I can’t pinpoint exactly what was wrong with them. Inasmuch as I was confused by the sides, I was overall satisfied with my Eggs Florentine. Though, I was thinking the craziest thing when eating my main; it had too much smoked salmon. I know, who thinks that?! There is usually never enough salmon! In this case I did find that the “smoked” aspect of the salmon was overpowering the other elements of the main. Would I order this dish again? Yes, but I would ask for fries as my side. 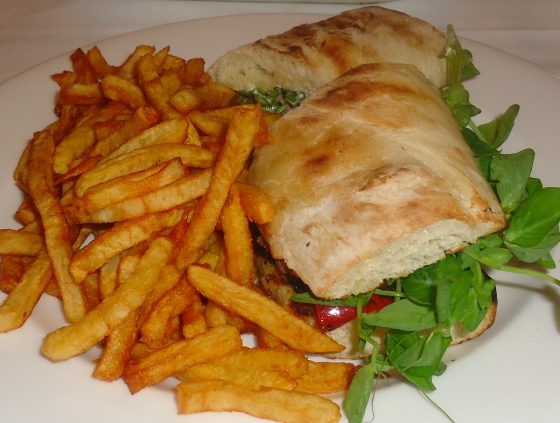 Main 2: Angela ordered the Grilled Steak Sandwich with Roasted Peppers, Portabella Mushrooms,  and Caper-tarragon Dressing, on A Manoucher’s Baguette Served With Frites for $14. First thought, “oh my gosh, is that fresh bread? It’s warm and delicious!” I am generally not a fan of sandwiches, specially because I often find the bread to be too tough. Definitely not the case here. The fries were also good, though I think that on the fries department Lola’s Kitchen and Le Select Bistro take the price. 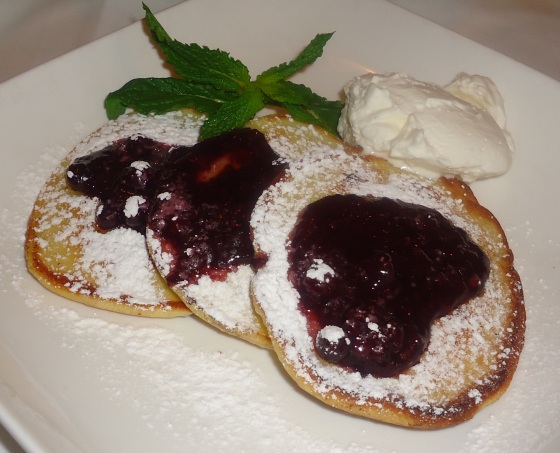 Main 3: Angela and I ordered this dish because we wanted to end our meal on a “sweet note.” That was a good one eh.  Here you have Fresh Blueberry Buttermilk Pancakes with Berry Compote, Maple Syrup, And Whipped Cream for $10. Since we received all our mains at the same time, I expected this dish not to taste as good because it was sitting there while we attacked our mains. Once we finished our savoury dishes we put them aside and pulled this plate closer to us. I broke off a piece and put it in my mouth expecting it to taste cold and dry because I did not pour a gallon of syrup on them like I usually do with my pancakes. Wrong! Yes, they were no longer hot, but they still tasted fresh. We were specially a fan of the whipped cream. It was nice and thick, and the berry compote was not too heavy or overpowering as I expected it to be. You could hardly taste the maple syrup because of the tanginess and tartness of the berry compote. But this was not a deal breaker. We totally made the right decision to end our meal with these pancakes.

I can now officially say that my hypothesis was wrong. I will definitely be coming back to Bodega. That is a rare statement for me to make because I have visited many restaurants for brunch and very few get a second visit.

Fyi, I am the first one to blog about Bodega’s brunch. Oh yeah.