I received an invitation to Little Sister and I had no idea who or what they were. True, most of my invitations are to restaurants, but it could have been an invitation to a class (I get quite a few of those too). Like, “bring your sibling to an arts and crafts class and enjoy a glass of wine while your sibling sips on milk and stares daggers into your back.” Oh Come on! I am sure they have several of those in the city.

One thing I was pretty confident about was the size. This place must be “little.” I know, my deduction skills are outstanding. Yeah, Sherlock and I go way back.

So after receiving the invitation, I did the first thing we all do when feeling lost and confused.

I was happy to learn that Little Sister is an Indonesian Food Bar. Awesome! Never eaten Indonesian food before! Oh wait. What is Indonesian food? So off I went and did the 2nd thing I do when feeling lost and confused.

From my buddy Wiki:

Indonesian cuisine is one of the most vibrant and colourful cuisines in the world, full of intense flavour. It is diverse, in part because Indonesia is composed of approximately 6,000 populated islands of the total 18,000 in the world’s largest archipelago, with more than 300 ethnic groups calling Indonesia their home. Many regional cuisines exist, often based upon indigenous culture and foreign influences.

Read that as: Indonesian food should not be bland and it has been influenced by many cultures.

Indonesian traditional meals usually consists of nasi (steamed rice) as the staple, surrounded by sayur-mayur (vegetables and soup) and lauk-pauk (meat or fish side dishes).

In a typical family meal, the family members gather around the table filled with steamed rice and several other dishes. Each dish is placed in piring saji or a separate communal large plate or in bowls. Each of these dishes has its own sendok saji or serving spoons, used only to take parts of the dishes from the communal plate into one’s own personal plate. In Indonesian customs — unlike in Japanese counterpart — it is quite acceptable to be seen to mix the different flavoured dishes in a single personal plate during consumption.

So feeling well-versed on Indonesian cuisine (ick!), I was eager to see what Little Sister was all about!

Little Sister is located on Yonge, south of Eglinton and is the only restaurant in Toronto that offers authentic Indonesian cuisine. Little Sister is the sibling (no pun intended) of Quince Bistro (located steps away–never been but I heard it’s good).  Both restaurants are owned by Jennifer Gittins and Michael van den Winkel, and also share the same culinary team. Awww, no sibling rivalry here!

I arrived early for my reservation and was immediately seated at the bar. Moments later Jennifer Gittins came over and introduced herself. Oddly enough I was feeling flustered. You see, there is something about Jennifer that exudes control and power. She seems calm and collected in a sea of controlled chaos (the restaurant was packed; people were eagerly waiting for tables by the door; staff was walking around serving patrons; food was coming out from the kitchen and empty plates were being brought back – plus, all this was happening in a very compact space).  Yet, she was professional, courteous, and friendly. Being used to restaurants where you are tempted to either a) train the staff yourself because they can’t do their job for shit; b) cook your own food because your meal is either taking an eternity to arrive or it tastes like crap that you want to teach the kitchen staff the benefits of using salt; c) milk your own cow since the milk your requested for your coffee has been forgotten; d) teach management leadership skills, etc. So let’s just say that the scenario at Little Sister was so unusual for me, that I became a nervous blubbering fool. Sigh.

Although Little Sister is small, it is not small enough to feel like you are getting to know your neighbors a little too well: “Yeah sure! Sit on my lap!” “Of course I want to hear your whole conversation! Who does not love hearing about global warming and kittens?” So, though compact, you have enough privacy to engage with your guest(s), and tune out those around you.

I knew coming in that the food would be served on small plates, so my friend and I decided to each order at least one skewer, 2 snacks, 2 mains (they call them “traditionals”) and 2 sides.  But first we started with a drink. I am usually not a cocktail drinker because I detest sugary drinks that remind me of boxed fruit punch, but when I see tequila as an ingredient, I can’t help but become curious (me likes tequila). So I ordered the Little Brother ($12) and my friend ordered the Bali Red Eye ($10)–details below.

Now let me show you how it went….

Odd, but I have a thing for ceilings… 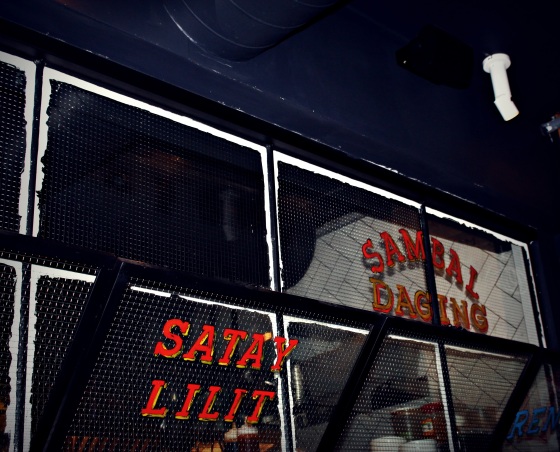 I love graffiti. Saw this on my way to the washroom

Though small, you could clearly taste the tequila. The flavors were crisp and fresh and not overly sweet. I would have liked to have tasted more ginger though. Maybe use ginger-infused sugar or salt crystals as a garnish? I enjoyed it nonetheless. 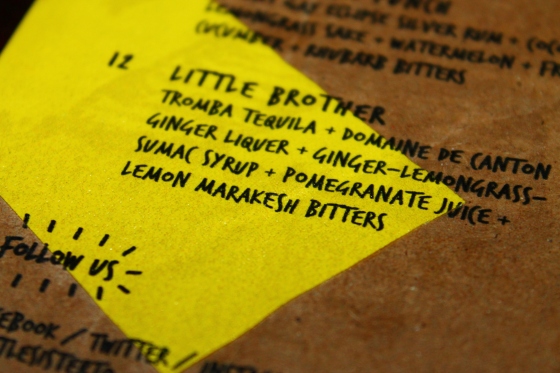 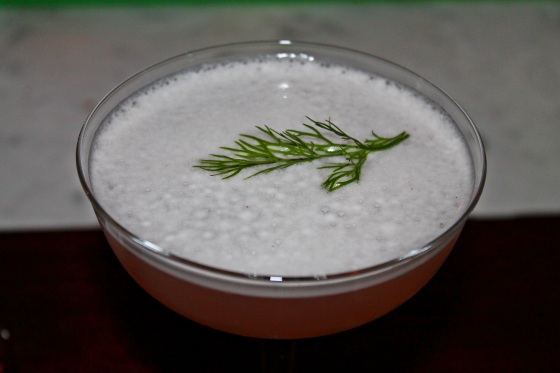 With every sip, my friend would announce which ingredient was most prevalent. Generally you will find that one ingredient will be more dominant over the others, but with the Bali Red Eye, it seems that every ingredient is given a moment in the spotlight. 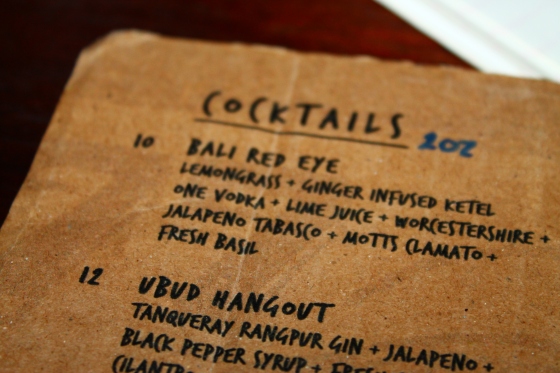 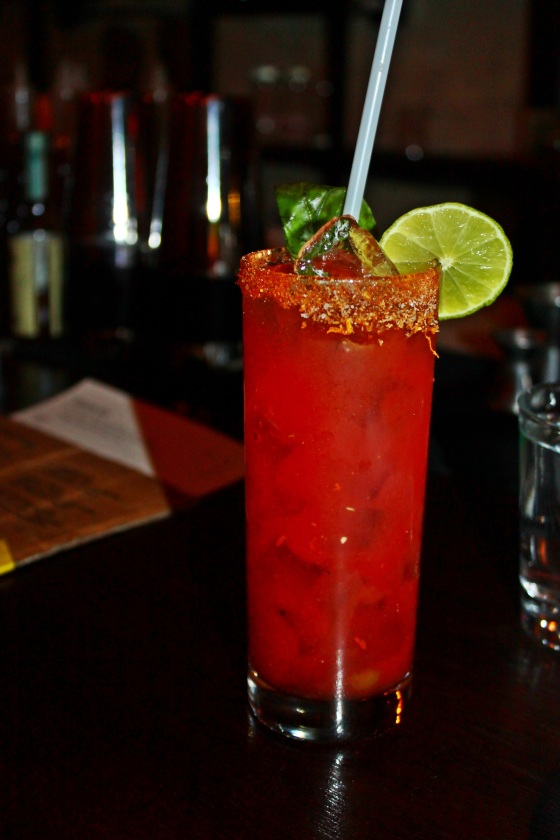 The salad was delicious, but the reason I did not love it is because when I read “fried” I was expecting more contrast in textures; I was expecting the cauliflower to be crispy. I guess because there was sauce on the plate, it was absorbed by the cauliflower which affected the texture. The crispy puffed rice certainly helped negate some of my disappointment.

Although I ordered this taco, my friend ate it! Grrr. But she swore that it was delicious, though it would benefit from more hot/chili sauce. In fact, a gentleman sitting near us commented that this taco is his favorite dish on the menu.

**Note, you are given many hot sauce options to choose from, so if you do not see it on your table, request it or grab it from the bar. 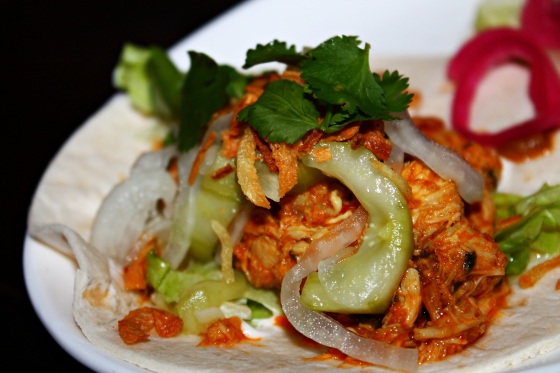 The meat was very tender and the sweetness of the coconut cream was nice. However, because I am used to eating tacos on corn tortillas, and I like more cilantro on my tacos with a fair amount of hot sauce, I felt torn.  One can argue that I was making an unfair comparison to what some may deem to be between apples and oranges. Fact is, if I wanted Mexican tacos, I should be going to a Mexican restaurant for them. I think it’s important to remember that just because it says “taco,” that it does not mean that it will be your standard Mexican-style taco–which can be a very good thing. Live a little! 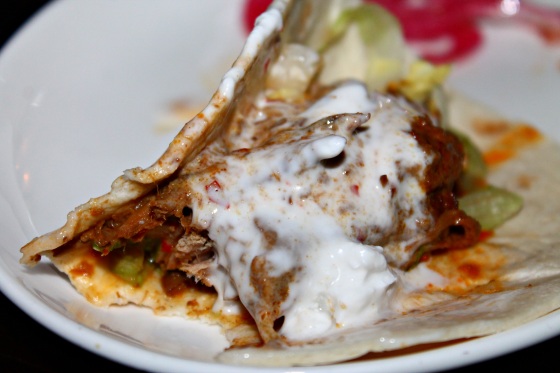 My friend and I loved this salad. We called it our “palette cleanser”. I almost feel like this salad should be mandatory (minus the onions–oh how I hate onions).  This is a perfect dish to eat in-between plates due to its fresh and clean taste.

I liked this dish but did not love it. I wanted the sauce to be spicier, and with more fresh herbs. But I am also one of those people who loves fresh herbs on all of my curries and sauces–bring on the cilantro! My friend on the other hand loved how it was not TOO spicy, and did not feel it lacked herbs. So there you have it. You can’t please everyone!

This was our favorite dish. We received it steaming hot, and it had a super crispy exterior with well-seasoned meat in the center. I also loved the spicy sauce that came with it. In fact, I loved the sauce so much, that I dipped all the other food in it. 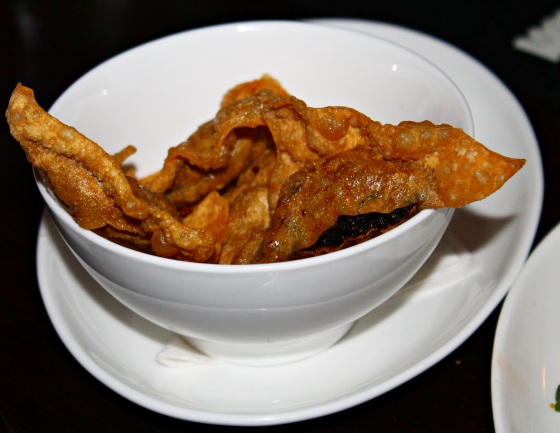 This was my friend’s dish and she loved how tender the chicken was and how it was perfectly charred (fine line between charred and burnt). She also enjoyed the balance of flavors–had enough of a chili kick without having to reach for a glass of water. I also did not mind the chicken, but I found it a bit dry and I wanted it spicier. I think with rice I would have loved it. 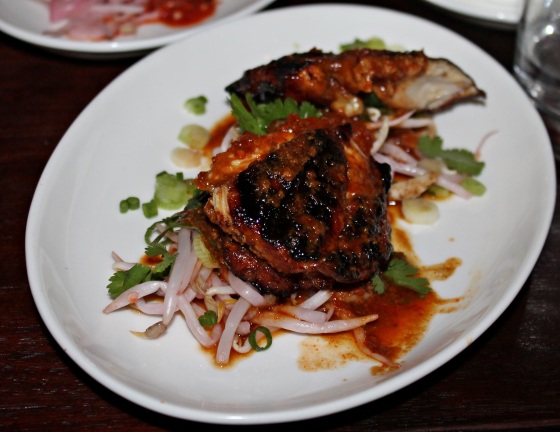 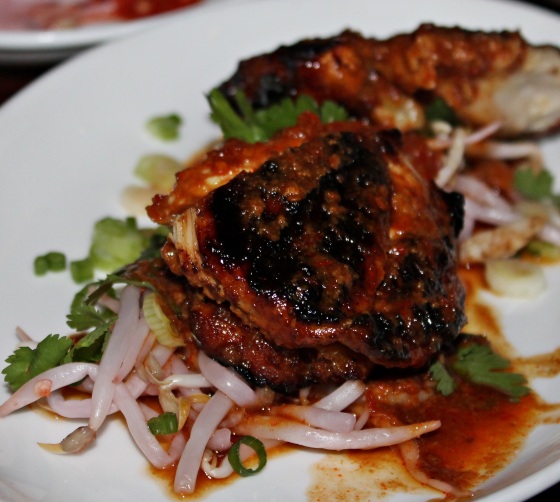 This was the last dish we received, and by this point, we were stuffed. Although I was full, I was blown away by how tender the meat was, and the different flavors that seem to have been infused into the meat. This was literally, melt-in-your mouth tender. Again, I would have liked it with rice. But on its own it was still fabulous. Only major complaint is the price. 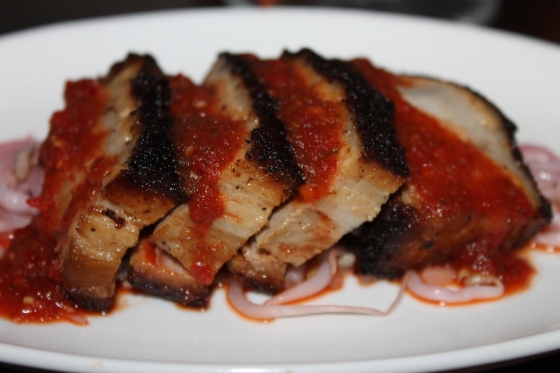 Thank you Jennifer and the team at Little Sister for treating us to very delicious food, and great service. My friend and I agreed that we have to come back as a group and order everything from the menu. I am confident that our friends will have a blast sampling all the dishes since the food is not only exciting, but also delicious.