I have walked past Crown and Dragon many times, but had never gone in. So when I won a $25 gift certificate on Twitter (@CrownandDragon) it was a bit worrisome since I live a short walk away, and if I liked it, chances were that I would make excuses to return – cause I love pubs, and one that serves great wings would be a dangerous place for me to frequent (got a figure to maintain ;)). Anyway, I contacted three of my closest friends, and suggested that we visit Crown and Dragon on an evening when wings are 50% off – so we went with a Tuesday night.

I arrived at 5:45pm and restaurant was already at 75% capacity. I agree that the furniture and vibe is quite dated, but if you have frequented as many pubs as I have in Ireland and Scotland, the best pubs are the ones that have not seen a coat of paint in decades, if not centuries, and you wonder whether the chair you are sitting on can be considered antique. So I had no qualms with the dated space.

There was one bartender and two waitresses. By 6:30pm the restaurant was at full capacity, and there were several groups waiting near the entrance for a table. Unfortunately, I felt that our waitress was more concerned about refilling our drinks, than food, so she would only come by when our drinks needed refilling (no, there are no free refills), but when we tried to get her attention for issues related to food – as in we want to order more food or inquiring about our missing order – she was difficult to flag down. But I guess it is understandable when you have a full house with limited staff.

It is true that most people visit Crown and Dragon for the wings, and rightly so. They have 18 flavors of fried wings, and 5 options for baked. We started with 4lb option and each one of us chose a flavor: Honeycomb Heaven, Don How’s Hawaii, Smokin’ Gun and one baked option – Do The Jerk. The wings came with the standard celery and carrot sticks, with a side of ranch dressing. We actually enjoyed all four flavors, though I preferred the fried wings, over the baked. For the 2nd round we chose: Dragon’s Breath, Turning Japanese, Mardi Gras, and Cuban Sun. I really liked the Dragon’s Breath, though I thought it could have been spicier, and also liked the crispness of the Mardi Gras but it was a tad too salty. I really did not like the Turning Japanese and the Cuban Sun – to the point that I only took one bite of each and refused to finish it.

Also, since appetizers are discounted before 6pm, I ordered the Spicy Spinach Dip ($9.95 – a spicy spinach and cheese dip, served warm with a side of pita and crispy tortilla chips), and was pleasantly surprised by the taste, though it did not look very appealing when it was placed in front of me. I also loved that the pita pieces were served warm.

My friend Angela loves sweet potato fries, so she ordered the Yam Fries ($6.95 – sweet potatoes that are hand cut and dipped with our own seasonings and golden fried) right after we had our first round of wings, and did not get them until we were almost done our second round of wings (the kitchen and waitress forgot about them). When the fries were placed in front of us, we did not know what the heck we were looking at! Each piece was massive, and unfortunately soggy! It also came with a really weird sauce on the side (soy sauce plus hot sauce combined). It was necessary for us to dip these beasts into the ranch dressing that was meant for the wings.

I really enjoyed the food and experience at Crown and Dragon, and loved having the option of trying a bunch of different wing flavors, so that on future visits, we can choose our favorites. Though I think that next time we will try the flavors we have not tried yet – 8 down, 15 to go! Oh, and I also want to try some of their other appetizers.

Special thanks to Crown and Dragon for the gift certificates! 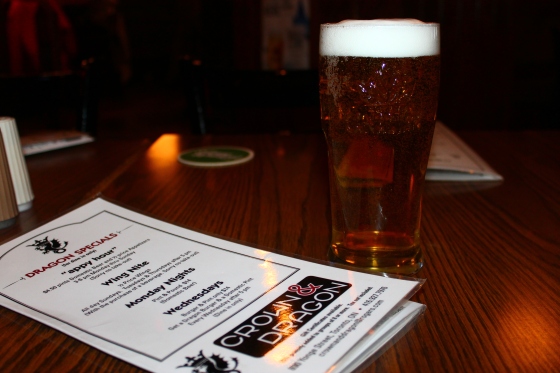 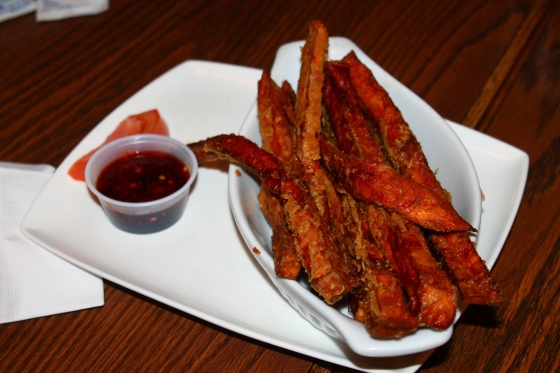