I had a bad meal at Great Jones Cafe. When I visited the restaurant only the brunch menu was available – I had seen reviews and photos from their regular menu and the food looked and sounded great. The brunch still sounded interesting, and being a Southern food lover, I was excited to try it out. However, my excitement quickly dissipated when the food was placed in front of me.

The plate looked like a battle between the South vs. Mexico – and they both lost. This meal was called huevos rancheros: two eggs sunny on a crispy tortilla smothered in salsa and in-between there was rice. There was also sour cream and for the two sides I got cheddar grits and corn bread. Sounds good….but..

The whole meal was bland, artificial-tasting and Taco Bell could have done a better job. Oh, there was cheese on the tortilla – and again, got totally lost. All this for $15.20 before tip! Ouch!

There was some good: friendly service, efficient, and they have WiFi. 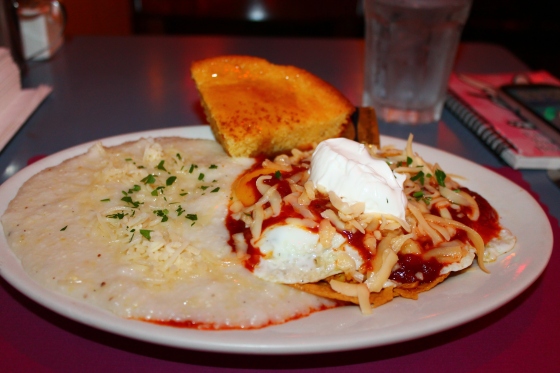